Oxygen is the simplest diatomic molecule having two unpaired electrons (electronic spin S=1) in their ground electronic state and for this reason it constitutes a physical object of considerable fundamental and applied interest in all its phases. Our general aim is the accurate characterization of the forces among oxygen molecules. Within the Born-Oppenheimer (BO) approximation, the equations of motion for the electrons of the system is first solved for every position of the nuclei and this process sets up a Potential Energy Surface (PES). We have obtained, for the first time, a global PES for the oxygen dimer based on high level electronic structure calculations[1]. This is a valuable starting point for a variety of studies since the same PES governs the motion of the nuclei in a range of different conditions (bound and continuum states), and furthermore, because the PES can be also used to study systems with many molecules under the assumption of pair-wise additivity of the interaction.

We studied rotational energy transfer in O2+O2 collisions in collaboration with the Laboratory of Molecular Fluid Dynamics (IEM-CSIC). Our quantum mechanical calculations of the state-to-state rate coefficients at low temperatures (20 K ) were tested against precise Raman measurements of the evolution of the rotational populations along a supersonic jet[2], and an experimental validation of the calculations (within 10%) was achieved. The same intermolecular interaction was used to compute collisions at much lower temperatures (mK) [3], concluding that Bose-Einstein condensation of this molecular species is really challenging.

We are investigating the onset of many body interactions in small O2 clusters, where pair-wise additivity breaks. 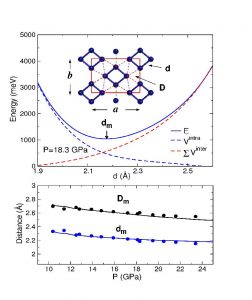 We have recently focused in,since it has been recently shown that this is the unit of the high pressure e phase. Impressive phenomena at the transition to this phase, such as magnetic collapse and color change, have opened the question about the nature of the intermolecular interactions within this cluster. We carried out the first high level multiconfigurational ab initio calculations of the singlet state of the cluster[4]. Significant many-body interactions at very short cluster sizes were found, indicating incipient chemical bonding. We have shown that these findings are consistent with various observations, for instance, the observed intra- and intercluster distances as a function of pressure (see Figure).

We use cookies on our website to give you the most relevant experience by remembering your preferences and repeat visits. By clicking “Accept All”, you consent to the use of ALL the cookies. However, you may visit "Cookie Settings" to provide a controlled consent.
Cookie SettingsAccept All
Manage consent

This website uses cookies to improve your experience while you navigate through the website. Out of these, the cookies that are categorized as necessary are stored on your browser as they are essential for the working of basic functionalities of the website. We also use third-party cookies that help us analyze and understand how you use this website. These cookies will be stored in your browser only with your consent. You also have the option to opt-out of these cookies. But opting out of some of these cookies may affect your browsing experience.
Necessary Always Enabled
Necessary cookies are absolutely essential for the website to function properly. These cookies ensure basic functionalities and security features of the website, anonymously.
Functional
Functional cookies help to perform certain functionalities like sharing the content of the website on social media platforms, collect feedbacks, and other third-party features.
Performance
Performance cookies are used to understand and analyze the key performance indexes of the website which helps in delivering a better user experience for the visitors.
Analytics
Analytical cookies are used to understand how visitors interact with the website. These cookies help provide information on metrics the number of visitors, bounce rate, traffic source, etc.
Advertisement
Advertisement cookies are used to provide visitors with relevant ads and marketing campaigns. These cookies track visitors across websites and collect information to provide customized ads.
Others
Other uncategorized cookies are those that are being analyzed and have not been classified into a category as yet.
SAVE & ACCEPT