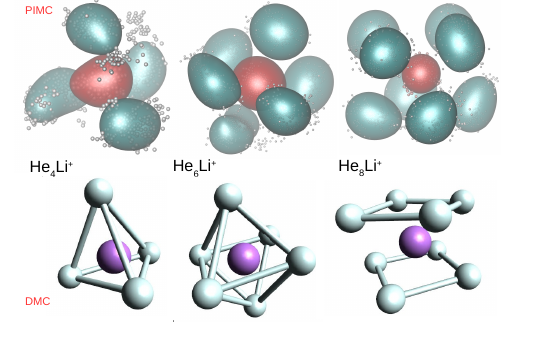 We review the solvation of atomic, molecular or cluster ions in HNDs. After briefly discussing the properties of snowballs in bulk helium we consider experimental conditions for the efficient synthesis of charged, doped HNDs. We show that the cluster ions observed in conventional mass spectrometers originate from fission of highly charged HNDs. The ionization threshold of HNDs doped with alkalis reveals the minimum cluster size required for full immersion. The abundance distributions of HeNX± ions frequently reveal local anomalies or magic numbers. We demonstrate that the abundance is approximately proportional to the evaporation energy. Observed and calculated magic numbers will be compiled, including data for ions solvated in molecular hydrogen. Alternative methods to forming HeNX± that do not employ HNDs will be summarized. Electronic excitation spectra of C60+ and polycyclic aromatic hydrocarbon ions reveal the properties of the helium adsorption layer in quantitative detail. Next we discuss theoretical efforts to describe the interaction between ions and helium. We close with summarizing the size dependence of physical quantities computed for atomic alkali and alkaline earth cations in helium, such as binding energy, superfluid fraction, structural order, radial density profiles, and the existence of first and higher solvation shells.

“Solvation of ions in Helium”.

We use cookies on our website to give you the most relevant experience by remembering your preferences and repeat visits. By clicking “Accept All”, you consent to the use of ALL the cookies. However, you may visit "Cookie Settings" to provide a controlled consent.
Cookie SettingsAccept All
Manage consent

This website uses cookies to improve your experience while you navigate through the website. Out of these, the cookies that are categorized as necessary are stored on your browser as they are essential for the working of basic functionalities of the website. We also use third-party cookies that help us analyze and understand how you use this website. These cookies will be stored in your browser only with your consent. You also have the option to opt-out of these cookies. But opting out of some of these cookies may affect your browsing experience.
Necessary Always Enabled
Necessary cookies are absolutely essential for the website to function properly. These cookies ensure basic functionalities and security features of the website, anonymously.
Functional
Functional cookies help to perform certain functionalities like sharing the content of the website on social media platforms, collect feedbacks, and other third-party features.
Performance
Performance cookies are used to understand and analyze the key performance indexes of the website which helps in delivering a better user experience for the visitors.
Analytics
Analytical cookies are used to understand how visitors interact with the website. These cookies help provide information on metrics the number of visitors, bounce rate, traffic source, etc.
Advertisement
Advertisement cookies are used to provide visitors with relevant ads and marketing campaigns. These cookies track visitors across websites and collect information to provide customized ads.
Others
Other uncategorized cookies are those that are being analyzed and have not been classified into a category as yet.
SAVE & ACCEPT