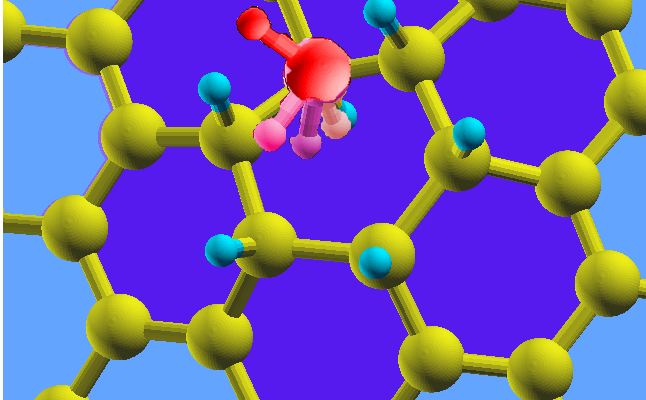 The interaction between protons and graphene is attracting a large interest due to recent experimentsshowing that these charged species permeate through the 2D material following a low barrier (~ 0.8 eV) activated process. A possible explanation involves the flipping of a chemisorbed proton (rotation of the C-H+ bond from one to the other side of the carbon layer) and previous studies have found so far that the energy barriers (around 3.5 eV) are too high to explain the experimental findings. Contrarily to the previously adopted model assuming an isolated proton, in this work we consider protonated graphene at high local coverage and explore the role played by nearby chemisorbed protons in the permeation process. By means of density functional theory calculations exploiting large molecular prototypes for graphene it is found that, when various protons are adsorbed on the same carbon hexagonal ring, the permeation barrier can be reduced down to 1.0 eV. The related mechanism is described in detail and could shed a new light on the interpretation of the experimental observations for proton permeation through graphene.

Permeation of chemisorbed hydrogen through graphene

March 12, 2021 Comments Off on Permeation of chemisorbed hydrogen through graphene

February 4, 2019 Comments Off on Frontiers of Molecular Physics

January 8, 2019 Comments Off on Cooperative mechanism proton permeation of graphene

October 17, 2018 Comments Off on lithium ions solvated in helium

November 21, 2017 Comments Off on Noncovalent interactions between cisplatin and graphene prototypes

September 28, 2017 Comments Off on Quantum transport of atoms through nanoporous membranes