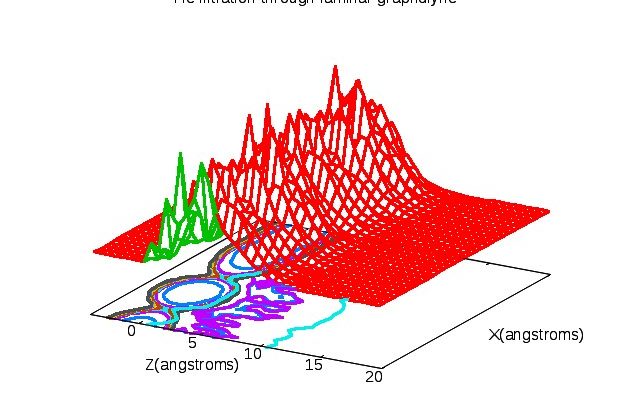 Quantum phenomena are relevant to the transport of light atoms and molecules through nanoporous membranes. Indeed, confinement provided by (sub)nanometer pores enhances quantum effects such as tunneling and zero point energy (ZPE), even leading to quantum sieving of different isotopes of a given element. In this work, we apply rigorous wave packet techniques to the simulation in the three-dimensional space of the passage of atoms through periodic rigid one-atom-thick membranes. We aim to assess more approximate quantum models such as one-dimensional tunneling calculations or transition state theory (TST). Calculations are reported for the transmission of 3He and 4He through graphdiyne as well as through a holey graphene model. For He–graphdiyne, conclusions from tunneling-corrected TST are confirmed: both tunneling and ZPE effects are significant, but competition between each other leads to a moderately small 4He/3He selectivity, in stark contrast with predictions from one-dimensional tunneling calculations. For the transport of He isotopes through leaky graphene, the computed transmission probabilities are highly structured suggesting widespread selective adsorption resonances and, this time, rate coefficients and selectivity ratios do not agree well with estimations from TST. This study intends to go one step further toward a better understanding of the quantum-mechanical processes in the transport of gases through nanoporous membranes.