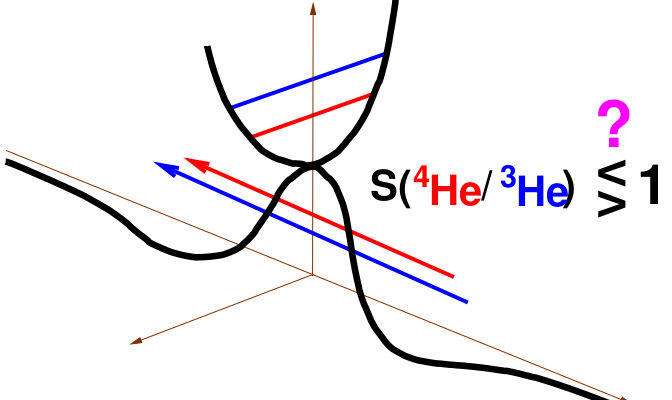 Recent progress in the production of new two-dimensional (2D) nanoporous materials is attracting considerable interest for applications to isotope separation in gases. In this paper we report a computational study of the transmission of 4He and 3He through the (subnanometer) pores of graphdiyne, a recently synthesized 2D carbon material. The He–graphdiyne interaction is represented by a force field parametrized upon ab initio calculations, and the 4He/3He selectivity is analyzed by tunneling-corrected transition state theory. We have found that both zero point energy (of the in-pore degrees of freedom) and tunneling effects play an extraordinary role at low temperatures (≈20–30 K). However, both quantum features work in opposite directions in such a way that the selectivity ratio does not reach an acceptable value. Nevertheless, the efficiency of zero point energy is in general larger, so that 4He tends to diffuse faster than 3He through the graphdiyne membrane, with a maximum performance at 23 K. Moreover, it is found that the transmission rates are too small in the studied temperature range, precluding practical applications. It is concluded that the role of the in-pore degrees of freedom should be included in computations of the transmission probabilities of molecules through nanoporous materials.